How does a static mixer work? 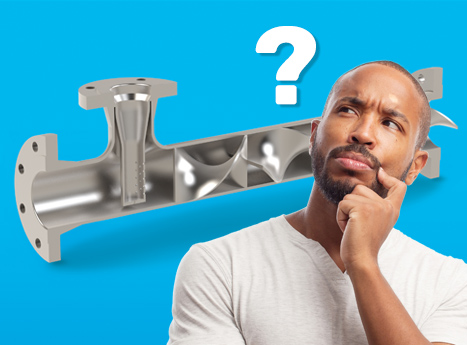 This news article explains the operating principle of the static mixer through a number of illustrative examples. Want to know more about how static mixers work, what they can be used for and the benefits of them, then it’s definitely a good read.

Try pouring salad oil on to water, what happens? You will see two layers have formed, the oil floats on top of the water. Try blowing air in to liquid, what happens? Air bubbles appear in the liquid but then also quickly disappear. In a thicker oil this will happen more slowly than in water. Oil, water or gas clearly don’t want to mix. These household, garden and kitchen phenomena are based on physical principles that the industry is also facing. A static mixer offers a good solution to this.

Mixing as a result of a forced flow

A static mixer consists of a tube element containing moulded parts, the so-called mixing elements, which ensure that the flow profile is disturbed (influenced) in such a way that everything is mixed into one homogeneous mixture. In a process, external components, such as a pump, provide the forced feed to the mixer. There are no moving parts in a static mixer and that has many advantages. As such, a static mixer does not require any maintenance, energy consumption is very low and there are no electrical components that could cause a potentially explosive atmosphere. Determining the implementation and number of moulded parts requires a lot of knowledge and complex calculation models and software packages are used to determine correct mixing. As a rule, when mixing, two mixing principles are applied from the flow theory, whereby mixing is created from a laminar or turbulent flow. Below is an image that shows a mixing action.

Example of an industrial application

An apt example is the measurement of a yield from an oil source. One of the reasons for this is the determination of taxes to be levied by government agencies. It’s not only crude oil that flows from a such a source but also pollutants such as (salt) water and sometimes gases too. The flow of these three components through a transport pipe is far from uniform; gas will separate quickly and locate itself at the top of the pipe, whereas liquids will flow through the bottom part of the pipe. A separation occurs as it would at home, only now on an industrial scale.

In order to measure the composition, a representative sample must be taken from the pipe. However, how do we obtain a homogeneous mixture from this pipeline? This can be done by placing a static mixer directly in front of the sampling point where the oil, water and gas are evenly mixed by the mixer. As such, taking a representative or homogeneous sample just after the static mixer is a piece of cake. Ultimately, following sampling, the oil, water and gas will separate again in the pipeline as a result of currents, but that’s not an issue.

Another example is application in our district heating. The water that is pumped to the houses must be at a constant temperature of 70°C. Water that is too hot or too cold results in dissatisfied users. For example, the hot water comes from the residual heat of a waste incineration plant. But this water is very hot and sometimes even reaches 120°C. So cold water is mixed in. Cold and warm water don’t naturally want to mix quickly which is desirable in terms of this process. A static mixer offers an effective solution and thus also contributes to making our energy consumption more green.